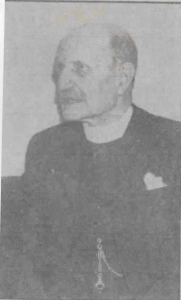 WILLIAM GUTHRIE ROBERTSON was the son of James Robertson and Elizabeth Bonnyman.  On 1871 census at Barefolds, Glass as a scholar aged 7.    Not sure about him on the 1881 census – he might have been at Keith as a boarder,  but he was on the 1891 census also at Barefolds, Glass as a Probationer Free Church, aged 27.  I looked the 1901 census on line and I think there are some errors so will check at Huntly Library this week.  The only one I found that would tie in was a Minister of Watten UF Church Caithness and it says born Glasgow  – I am sure this is the right one as I never trust the transcriptions on the net.   Especially the 1901 one!

Aberdeen Journal 13 September 1916
CAITHNESS UNITED FREE PRESBYTERY
Caithness UF Presbytery met at Thurso yesterday.  Unanimous leave of absence was given for four months to Rev. W.G. Robertson, Watten to enable him to engage in Y.M.C.A. work with the troops in France.

The Rev. W. Guthrie Robertson, M.A. Watten, Caithness, was yesterday inducted by the Presbytery of Strathbogie to the combined charge of Grange West and Whitehills congregation, in succession to the Rev. T.C. Hendry, translated to St James’s Lossiemouth.

The Rev. Wm. Macgillivray, Cairnie, interim moderator during the vacancy, presided over a crowded gathering, and read many telegrams of congratulation and good wishes to minister and congregation, including from Watten congregation and office-bearers.

In name of the congregation Mr John Raffan, Mains of Balnamoon, presented Mr Robertson with a wallet of Treasury notes, conveying a hearty welcome and best wishes for happiness and hoped Mr and Mrs Robertson might be long spared among them.

INTERESTED IN GRANGE
Mr Robertson, thanked them for the handsome gift, their call to be their minister and their hearty welcome.

He had been interested in Grange for many years.  It was there as a student that he preached his first sermon.  He was very anxious and then went out among the trees at the back before he began the service and asked the blessing of God at that early day and now he was there that day as their minister.

He had been asked to other congregations, but had never gone from Watten.  But when the Grange call came from the Presbytery who licensed him to preach the gospel and from a congregation not far from his native parish, he would have found it very difficult not to accept their call.

In the name of the Presbytery, Mr McLaren, moderator, welcomed Mr Robertson, who in reply referred to his friendship with Mr Macfadyen, Marnoch: Mr Guthrie, Glass and others.

Grange West Whitehill Church Woman’s Guild met in Whitehill Church to do honour to the Rev. W.G. Robertson and Mrs Robertson on the occasion of Mr Robertson’s retirement from the active ministry.  The large gathering gave evidence of the esteem and affection in which they were held.

Mrs G. Lawrence, vice-president, in laudatory terms, presented Mr Robertson with a wireless set and wallet of notes and Mrs Robertson was presented with a reading lamp by Mr J.S. Watson, treasurer of the West Church.

Mr Robertson on behalf of Mrs Robertson and himself, thanked the subscribers for their gifts.  He said they had been exceedingly kind to his wife and himself and he would like them to know that they were most grateful.  The feeling of sadness in leaving the work in which he had been engaged for so many years was mitigated very much by the fact that they were not going far away.  Mr and Mrs Robertson are to reside in Portsoy.

In age and religious experience, they ranged from the eighty-seven year old Rev W.G. Robertson, the oldest surviving alumnus – he entered the college in 1885 – and Mr James B. Ingram, Cullen, a twenty year old student who began his studies only last month.

Mr Robertson retired twelve years ago.  He held a charge at Watten, Caithness for thirty-nine years and at Grange near Huntly for seven years.