By the death of Mr Robert Archibald, which occurred at Dumeath on Tuesday, the parish of Glass has lost one of the most popular and enterprising inhabitants.  Mr Archibald, who was born at Dumeath about 79 years ago, witnessed not a few notable changes during his life time.  Deceased was thoroughly familiar with the history of the parishes of Glass and Cabrach and a good deal of his knowledge was founded from Inscriptions on old tombstones.  Mr Archibald, who was of a very kind and obliging disposition, was a member of the Church of Scotland, and a staunch Conservative in politics.  He was farmer of Dumeath almost since his infancy and was a very prosperous agriculturist, keeping as he did a very pure stock of cattle.  He leaves a family of five daughters (four of whom are married) and three sons.  His eldest son is farmer of the Park of Brucks, while his second succeeds him at Dumeath.

By the death of Mr Thomas Duncan, farmer, Glenmarkie, Glass has lost its oldest residenters.  Deceased, who was born at Mains of Bellyhaugh in 1809, was the eldest son of Mr Duncan, farmer.  He had fifteen of a family of whom seven sons and three daughters survive.  In Mr Duncan’s younger days, Glass Market was considered the most popular of its kind in Scotland.  Many a row in this market did deceased see and nothing delighted him better than to narrate his experiences to his neighbours while enjoying a winter evening beside his own peat ingle.  For a short time he was tenant of Claymires, in the parish of Rothiemay.  He was twice married, first to Miss Shearer, Toncood and afterwards to Miss Dawson, Rotnoddie.   His oldest son is now farmer of Glenmarkie, of which farm deceased became tenant in 1857.  He had fully forty grandchildren and twelve great grandchildren.  Mr Duncan, was an elder of the Church of Mortlach and a Conservative in politics.

THE OLDEST INHABITANT OF GLASS

The oldest woman in the parish of Glass has just passed away at the age of 89 years.  Her name was Annie Moir and she resided at Drumduan all her life.  In her declining years she has been under the care of Mr and Mrs Watt, Drumduan.  The Moirs came to Glass and resided at Drumduan about 218 years.  They tenanted the farm of Drumduan for 198 years.  Miss Moir has a sister living in Forgue who is 95 years of age.  The Moirs of Drumduan are descendants of the famous “Lang Johnny Moir” So much spoken of in local ballads and history.

FUNERAL OF MR GEDDES OF BLAIRMORE

The remains of the late Mr Alex. Geddes of Blairmore were interred on Saturday in the family burying-ground at Walla Kirk, beside those of his father and mother.  Deceased’s son, Mr Alister Geddes, with Mrs Geddes and Miss Marjory Geddes, were present, but the other members of the family are in America.  There was a very large attendance of representative public men from the surrounding district and of the tenantry and private friends of the deceased.  Impressive services were held in the house for the relatives and most intimate friends and outside in front of the residence for the general public, the former being conducted by Rev. Mr Ross, assisted by Rev. J.R. Cumming, Mortlach; and the latter by Rev D. Macaulay, United Free Church, Glass; and Rev Alex. Mackay, Botriphnie.  A procession was then formed, comprising some 300 pedestrians, followed by between 20 and 30 conveyances and the coffin was borne by relays of four gentlemen, regulated under the charge of Mr David Wood, School-house, Glass.  The cortege was solemn and impressing one as it slowly wended its way to the old family burying-ground of Walla Kirk, which is about ten miles up the glen, and picturesquely situated on the banks of the Deveron.  Rev Mr Pirie, Nairn, conducted service at the grave.  The pall-bearers were ;- Master Alister Geddes (son): Professor Harrower, Aberdeen: Mr Hugh Reid, Auchterarder: Mr Stewart Farquharson of Whitehouse: Rev D.M. Ross, The Manse, Glass: Mr William Kirkwood, Chicago: Dr Cowie, Dufftown: Mr T.F. Wells, Chicago: and Mr J. H. Adams, Newcastle.  There was a magnificent display of wreaths sent by relatives and other friends.

The death occurred rather suddenly at Belnaboth, Glass, yesterday of Mr Alexander Bonnyman, late overseer on the Blairmore estate, at the age of 63 years.  Although he had not been in robust health for some time, Mir Bonnyman was attending to his work at the farm up till Tuesday, when he became suddenly ill.  The deceased had been tenant of the farm of Belnaboth for eleven years.  For many years he acted as overseer to the late Mr Alexander Geddes on the Blairmore estate and while here, he was greatly respected, both by the laird and the employees on the estate.  He was a man of wide knowledge and experience in agricultural work and was known and held in high esteem by the farmers and others in the district.  Mr Bonnyman was a member of the United Free Church, of which he was an ardent supporter.  In politics he was an out and out Liberal and he took a very keen interest in the recent election.  He leaves a widow and three children, to whom much sympathy will be extended in their sad bereavement.

The funeral took place yesterday of one of the oldest inhabitants of Glass – Mr Alexander Horn, Westerpark.  He had not been in robust health for some time, although not laid aside altogether and the end came on Saturday.  The deceased, who was 82 years of age, was a native of Glass, being born at Bodylair, which farm he occupied for a large number of years, leaving it about eleven years ago for the larger holding of Westerpark.  He was of a very quiet disposition and a very kind neighbour.  A member of the United Free Church congregation, he first held the office of deacon and then as an elder for a number of years.  He was predeceased by his wife about eighteen months ago and is survived by two sons and one daughter.

At the close of the sermon in Glass  Parish Church on Sunday, reference was made by Mr Ross and a generous tribute paid to Mr Wood and his labours in the parish.  Sir Frederick Bridge, organist Westminster Abbey played the Dead March in “Saul”, the congregation standing whilst it was being rendered.

See Mr Geddes above for another reference to Mr Wood.

Mr Macaulay was ordained to Glass in 1876 and retired in 1912.  He was an able and cultured preacher and was held in the highest esteem.

He is survived by Mrs Macaulay, one son and four daughters.  The son Mr James Macaulay, is with the Western Telegraph Company in Canada.  The married daughters are Mrs Wm. Duncan, Edinglassie, Glass: and Mrs Dewar, wife of Mr David Dewar, solicitor, Aberdeen: and there are two unmarried daughters.

Death of Minister of Glass, Aberdeenshire

The Rev. Thomas Miller Young, minister at the South Church, Glass, has died in his fifty-fourth year.

Mr Young had a charge in Shetland before going to Glass and had several other charges as an ordained missionary.  He saw service in the Royal Engineers during the war and had in consequence of his sufferings a long period of ill-health.  He was a very bright man in every way as a preacher and pastor and was greatly beloved.

His wife died a few years ago and he has left three daughters – one a teacher in Aberdeen, the other in the same profession in the south and the youngest at home.

Mr Campbell who was fifty-two, was a native of Stornoway.  He was educated at Aberdeen University and his first charge was at Croy.  From there he moved to Bonnethill, Dundee, and before taking the charge at Glass in 1947, he was minister of St. Bernard’s – Davidson, Edinburgh, for fifteen years.

Mr Campbell, who served as an officer in the Army, during the 1914-18 war, leaves a wife and one son.

Mr George Mavor, farmer, Cairnmore, one of the oldest inhabitants of the parish of Glass, died on Friday at the age of 83.  He had spent his whole life on the farm where he died.  He took no part in public work, but was always interested in the affairs of the parish.  He is survived by his wife and a family of sons and daughters.  He funeral, which was largely attended, too place on Tuesday to the churchyard of Glass, the service being conducted by the Rev. W.G. Guthrie, minister of the parish.

Intercessory Service – An intercessory service was held in the Parish Church on Sunday.  The Rev. W.G. Guthrie gave an impressive address and appropriate Psalms and hymns were sung.

The death has occurred of Mr William Watt, Sen. Retired farmer, Drumduan, Glass.  Mr Watt was in his 90th year.  He was for upwards of 42 years an elder in the Parish Church of Glass and for several years the senior elder.  Pulpit references were made concerning his loss to the parish of Glass in both the Parish and the U.F. Churches.

The below information was kindly provided by Hamish Mclennan concerning the passing of his maternal great grandfather William Watt – May 28th 1912 at the Lower Ardwell.

Hamish writes:
Please find a photograph of my maternal great grandfather and the press report of his funeral and interment at Wallakirk. The photograph was taken outside the Richmond Hotel/Grouse Inn. 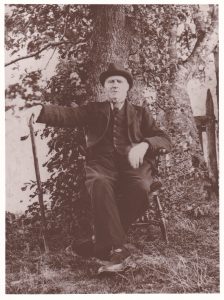