It was with feelings of genuine regret many in Strathbogie learned on Monday that Miss Annie Jean Bonnyman – younger daughter of Mrs Bonnyman, Belnaboth, Glass – had passed away on the previous day at Windygates, Fifeshire.  Miss Bonnyman had only been a few days ill but for a short time before the end came her condition was seen to be extremely critical.  At Windygates where she was teacher in Balcurvie School, the news of her death created profound sorrow amongst her fellow teachers and pupils as well as in the village where – though comparatively brief her stay – she had made many friends who held her in warm regard.   Up the way of Glass – where her own happy home was situated – it is not too much to say that regret of the deepest kind is felt at the early closing of a young life so rich in promise.  Miss Bonnyman only finished her course of training in Aberdeen last summer and commenced her duties in Balcurvie at the end of October last.  She gave promise of being a most successful teacher and a school choir trained by her was very highly commended by the adjudicator at the recent Fife Musical Festival and was awarded the Challenge Banner.  Miss Bonnyman, it is no exaggeration to say, carried with her unmistakable evidences of the excellence of her home life.  There were few more honourable or upright men than her late father, Mr Alexander Bonnyman, for so long a period manager of the Blairmore estate; and than Mrs Bonnyman there are equally few who so finely adorn all that is best in motherhood.  Miss Bonnyman was a young lady of most loveable and attractive character – bright, obliging and courteous and was held in very warm affection by all who knew her.  In the sore bereavement they have sustained, Mrs Bonnyman and family have the deep sympathy of their wide circle of friends in the Deveron and Bogie Valley and elsewhere.

Miss Bonnyman’s remains were conveyed to her native parish for interment on Tuesday morning, being escorted to the railway station by her fellow teachers and a few friends, after a service conducted by Rev. Mr Hobbes.  The funeral took place from Belnaboth to the beautifully situated “God’s acre” of Wallakirk on Wednesday afternoon and was largely attended.  Services in the house and at the graveside were conducted by the Rev  Mr Murdoch, United Free Church.  The chief mourners were Mr James Bonnyman (brother), Mr James Duff, Boghead and Mr George Duff, Towiemore (uncles): Messrs James, George, John and Frederick Duff, Boghead and Mr James Bonnyman, Blackbog and Bailie Kennedy, Huntly (cousins). 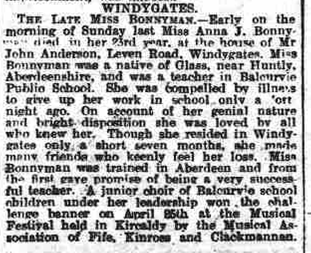