This story was kindly sent to us by Marina Alexander.

This true ghostly story of what happened to my grandparents at Greystonefolds  – my mother told me about it many times, but I found this article which Mr Gordon had written about it, when clearing the clutter!

Greystonefaulds, that ancient building standing high up on the Northern slopes of the Market Hill of Glass, had been created as its name suggests, as a fauld or piece of land set apart and manured by cattle and sheep kept there overnight and belonging to the still more ancient Greystone Farm.

At a more recent period a house and farm buildings had been built, enabling the site to achieve the status of a proper farm in its own right.  Despite its North facing aspect and its relative isolation – lying at the end of a narrow unmade road a quarter of a mile or so from the Glass/Cabrach road – the outlook was nevertheless particularly pleasing, overlooking such well known features as the Old Manse Farm, the Torry Farm and the Both Hill.  In addition the traffic on the Huntly/Dufftown road ensured that life at Greystonefaulds was never lonely.

Within the last century the farm was the scene of a remarkable demonstration of the paranormal.  After the departure in 1889 of the Fraser family – who had lived at Greystonefaulds since about 1780 – the holding was occupied by George Gauld, the holder of a name which had become synonymous with that picturesque, upland parish watered by the river Deveron, so much so that is said that every Gauld must have an ancestral connection with Glass.

George, already an old man, had recently vacated the farm of Loanhead, also in Glass, which his family had occupied since 1700, was accompanied in the move by his daughter Jane, married to another Gauld – called James.  George Gauld died in 1892 while his daughter died in June 1922 leaving her husband a widower, the family having long since left the home.

James Gauld was then approaching seventy years of age and soon after Jane’s death, to help him with the farm, the son of his late wife, George Gauld Duncan came to live at Greystonefaulds with his wife and family.  James was glad of the company, the Duncan’s were an exceedingly agreeable family and they made Greystonefaulds a happy home but for some unaccountable reason, James Gauld decided, sometime in 1923, that he would quit his old home and the friends of a lifetime to spend the rest of his days with his son Tom  and daughter Lizzie, in Toronto, Canada.

It was a momentous step to take in exchanging the leisurely pace of life in Glass for the noise and bustle of a city on the other side of the ocean, but that was what James Gauld wanted and frequent letters to the Duncan family, indicated that he was settling down quite happily in his new surroundings.

For no apparent reason sound sleep did not come easily to the head of the house of Greystonefaulds, nor indeed to his wife on the night of the 12th December 1924 – a premonition of coming events perhaps!

Not long after retiring, lying awake after a fitful sleep, both heard movement in the house, the sound of someone walking across the floor downstairs and then the same footsteps in a bedroom upstairs.

This was quite alarming.  It was ten minutes past one in the morning, surely there was not an intruder around at that hour.  George Duncan called out but there was no answer, he then rose to examine the locks and search the downstairs rooms, all were secure and nothing amiss.  As may be imagined they were mystified and not a little disturbed and after some discussion, both came to the same conclusion that the footsteps seemed like those of old Jimmy Gauld, just as though he were walking about as they had heard him do in the recent past.  But no, that was impossible, Jimmy was in Toronto, thousands of miles away, or was he?    But the nagging thought persisted, neither could deny the truth of what they had heard.  The footsteps were those of old Jimmy – it was his walk!

When daylight came and house was astir, Mrs Duncan asked her three daughters, who had been in bed asleep upstairs, if any of them had heard anything during the night.  The girls heard nothing:  the visitation had not disturbed them.

The days passed without further disturbance and the happenings might have been forgotten or passed on to future generations as a legend of other days, had not a letter arrived before the year’s end from Jimmy’s son in Toronto with the sad news that his father had died on the 13th December – at ten minutes past one in the morning – the exact time the Duncan’s had  been disturbed by the phantom footsteps!

The photo below is Jane outside Greystonefaulds. 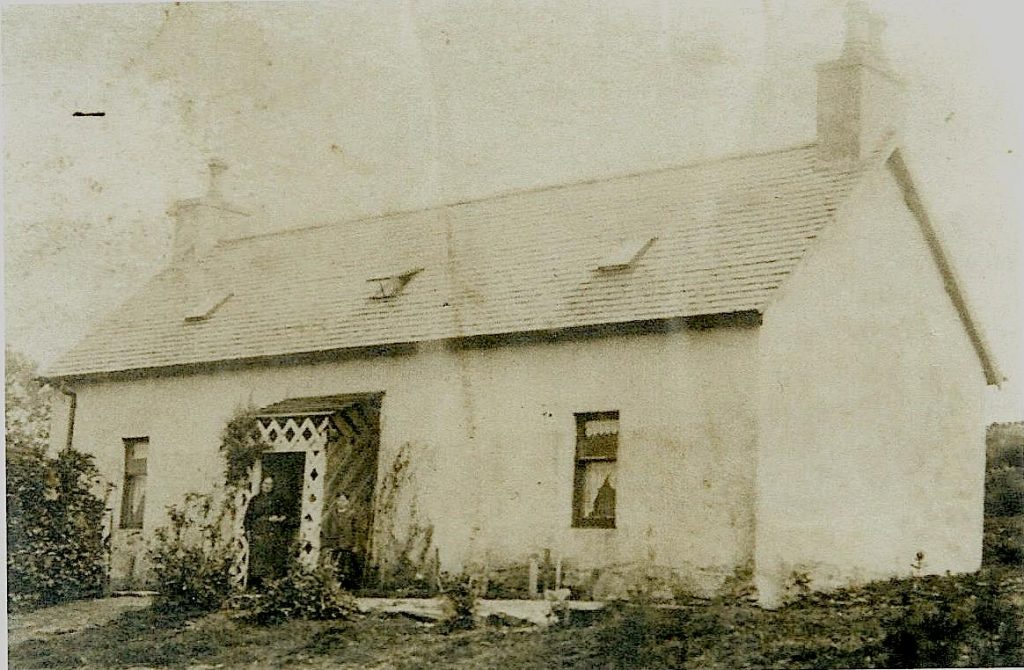