The Scots Guards had been recruiting in the Huntly district for several years and among those who joined them was George Wattfrom Frosterseat, Glass.  George signed on at Huntly on 11 March 1854 was five foot nine, brown haired, blue eyed and barely aged sixteen.  In next to no time he was on his way to the Eastern Mediterranean with the 1st Battalion of the Regiment.

Youthful George Watt’s first and only experience of the War (Crimean) was brief and painful  He received a gunshot wound in the neck, the ball entering the mastoid on the right side and was partially extracted below the malar bone on the same side, dislodging portions of the malar bone – he was lucky to be alive.  His last recollection of the battle is of hearing someone say “We’el better give this one a good bed, he’ll not need it very long; evidently the stretcher-bearers who came out in the evening after the battle to search for survivors and busy the dead, thought he would not last long.

Back in Glass his mother learned from “the Aberdeen Herald” of 14 October 1854 that in a long list of North East casualties in the Scots Guards at the Alma was the name of “George Watt, shot through the face severely”.  Nothing more was heard for years; she thought he had died of his wounds.

Then quite out of the blue, one Sunday forenoon in the middle of 1857, while at Church with her daughter, she received word thatGeorge had arrived in Glass.  The long years of silence were explained by his inability to leave hospital in Scutari on account of his wound, followed by a lengthy spell in England, before his final discharge from the Regiment on the 9th June 1857, “unfit for further service and awarded a pension of eight pence per day”

The whole of Glass was full of the story, including the young girl at the Mains of Aswanly who knew that George Watt lived at Frosterseat, just across the road from the Boghead’s, but at that stage she had no thoughts beyond normal everyday interest;  that was to change however when walking up the Boghead Brae one day she spied the young soldier speaking to James Smith and Willie Robertson, the farmer in Wester Boghead.

Nellie did not stop and speak to them, nor they to her, but she had a good look and decided there and then that this was the man she was going to marry.  And marry him she did – at the Established Church of Glass on the 10 June 1860.

George who had the clasp of the Alma and was a Chelsea Pensioner, returned to work as an agricultural labourer but he was never robust and died at Frosterseat on 7th May  1875 at the early age of thirty eight; on his death certificate he is rather ungenerously described as “pauper” and molecatcher; his wife Nellie died there 19th December 1922 aged eighty three. 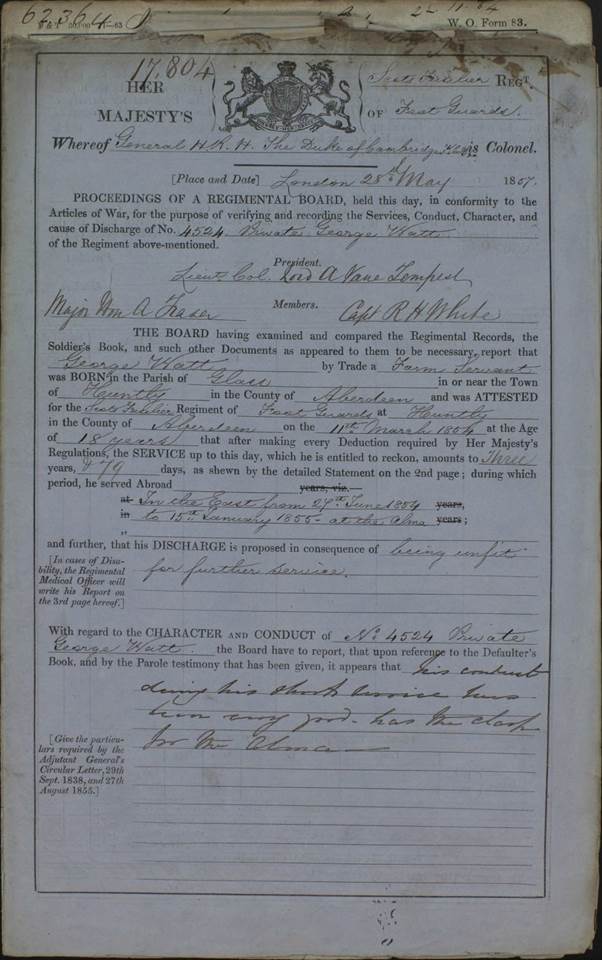