Currently ( March 2014) there is no Footbridge at the Wallakirk, only the bridge supports remain.

Below is some information on how the original bridge was planned and built.

24 August 1896
Parish Council do now consider the propriety of improving a Special assessment on the Parish for needed improvements in it.

Moved by Alexander Geddes and seconded by Alexander Robertson that this Parish Council see necessity for expenditure on a Bridge at Wallakirk to replace the dangerously existing foot bridge there and that it is the sense of this Council that a Road Bridge for Cart Traffic be constructed rather than simply a foot bridge and that the first expenditure from proposed assessment be diverted to this object.

The Council proceeded in terms of last minute to discuss the propriety of imposing a special rate and after discussion it was moved and seconded that the Council impose a Special Rate of 6d per £ for needed improvements in terms of the act and with special reference to the Bridge at Wallakirk.

The condition of the Footbridge at Wallakirk was brought under the notice of the Council and a Committee consisting of Messrs Bennet, A & W Robertson was appointed to examine the Bridge and consult with Mr James Morrison, Carpenter and do anything that seems necessary to render the Bridge safe in the meantime.

A letter was read from Mrs Grant, Beldorney relating to the advantage of a Road Bridge instead of a Foot Bridge over the Deveron at Wallakirk.  The Council recognises that some kind of bridge must be constructed but defers nature of bridge until the Parish Council be informed what subscription would be given by those most interested in a Road Bridge as the Parish Council have decided against incurring as a Council the additional expense involved in a Road Bridge.

Referring to the correspondence between Mrs Grant of Beldorney and Council with regard to the Bridge at Wallakirk, as Council had no information of any adequate subscriptions from parties interested, after due consideration the Clerk was instructed to take in estimates for a Wooden Bridge similar to the present Foot Bridge to be built on the same site, to be built of Larch and tarred and to be finished by the end of October.

Inspector reported having carried out instructions of the Council as in last minute with regard to Bridge at Wallakirk and had received only one offer viz;- from Mr Dey, Forkins, Botriphnie, whose letter was read to the meeting.  Mr Dey had been invited to the meeting for consultation but in his unavoidable absence his son was present instead who assisted the Council in their deliberations.  After careful examination and due consideration, the Council instructed their Clerk to write Mr Dey accepting his offer to construct a Foot Bridge at Wallakirk for £25 with the following modifications in his plan.

(1) that instead of two main beams, there be three allowing that the middle one need not be quite so strong as the two outer ones and they may be of  pitch pine.

(2) that there be no braces below the bridge, as they would endanger the bridge in times of flood and ice but that instead, beams in the form of couples be on both sides of the footway, above and forming part of railing.

The members having carefully inspected the Bridge newly constructed over the river by Mr Day, Forkins, unanimously expressed their great satisfaction with the work and asked the Clerk to intimate the same to Mr Dey and to send a cheque for £25 being the contract price.

It was decided to complete the railings on both sides of the Bridge for greater safety of the Public and that Mr Dey be asked to do it as soon as convenient.

The Inspector reported having written Mr Dey, Forkins in accordance with last Minute and read reply from Mr Dey in which he took in hand to erect railings at Wallakirk as desired.  The Clerk was instructed to write Mr Dey, asking him to inform the Council, when he would be putting up the railings as steps leading to the Bridge were to be repaired beforehand.

The Clerk intimated having seen William Fergusson, Glass, who consented to repair the steps at Wallakirk Bridge and as it was mentioned at the meeting that that had been done, the Clerk was asked to intimate the same to Mr Dey, Forkins, in order that the hand-rails may be put up as soon as possible.

In view of the precarious condition of the Bridge over the Deveron at Wallakirk it was decided to hold a special meeting of the Council at Wallakirk on Monday 21st inst at 5 pm and Mr Robertson undertook to procure the attendance of Mr Ritchie, carpenter, Cairnie to advise the Council as to the desirability of repairing the present bridge or building a new one.

After consultation with Mr Ritchie it was decided to repair the Bridge and Mr Ritchie was instructed to proceed with the work.

Mr Alex. Mitchell, clerk, reported that he had taken in an estimate for repairing the bridge over the Deveron at Wallakirk, Glass, which at the last meeting of the Council was reported to be badly in need of repair.  The estimate, which was from a local tradesman, Mr Charles Gordon, carpenter, Glass, was for £50.

R James Duff, Boghead – The bridge is done, especially on the south side, and is in a very dangerous condition.  We must keep up this bridge because it is on the right of way.

Mr A. Simpson, Broadland – I would suggest that we ask Mr Fowlie, the road surveyor, to come and see the Wallakirk Bridge when he comes to see the bridge at Terryhorn.  He has to do that very soon and he could get them both done at the same time.  We should also take in offers for both bridges.

Mr Lockhart – That is a good idea, Mr Simpson.

This was agreed upon and the Clerk was instructed to write the Surveyor accordingly and that the matter be further considered at the next meeting.

Below are some photographs of how the bridge looked in the mid 1990’s before it fell into dis-repair. 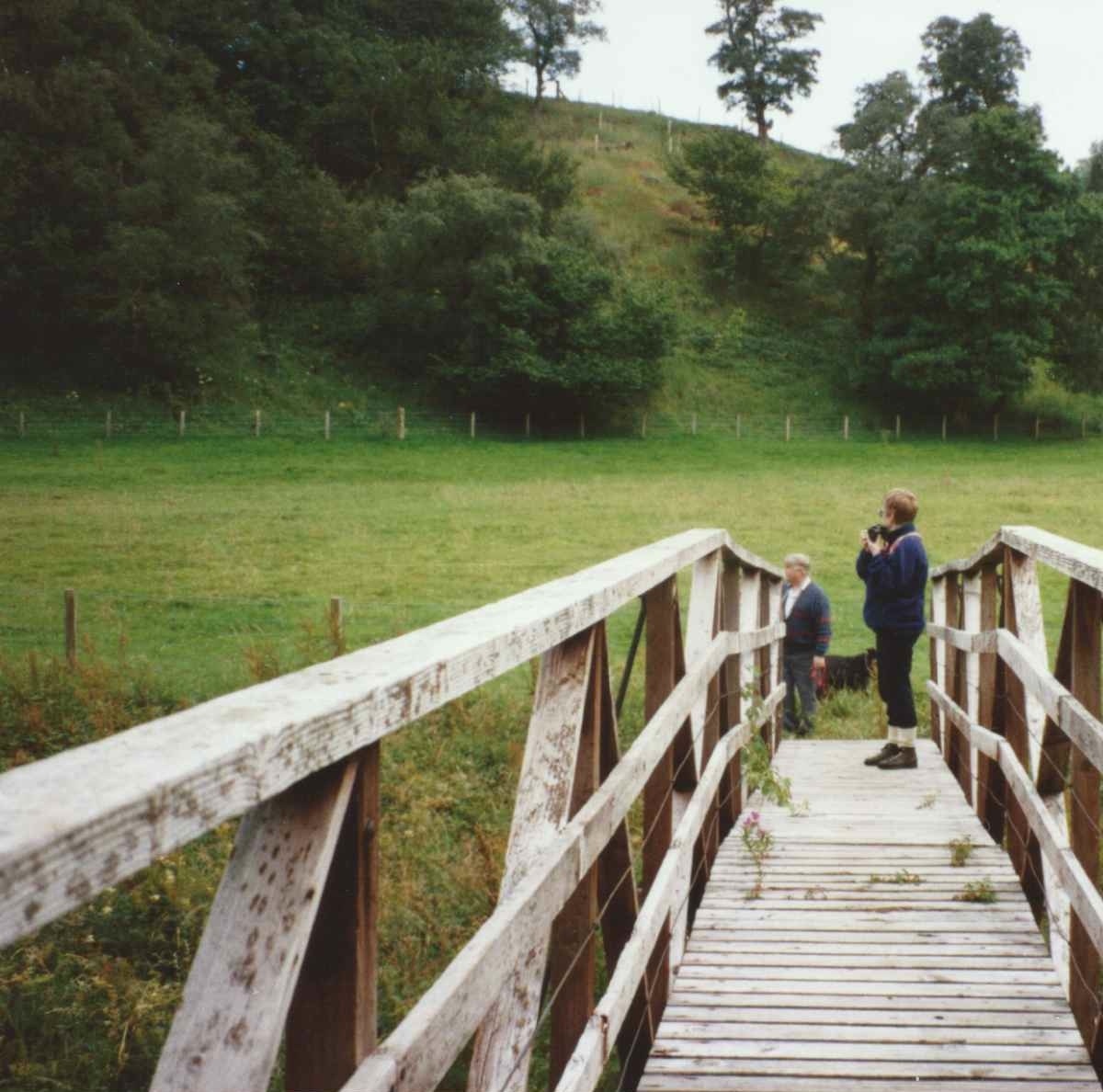 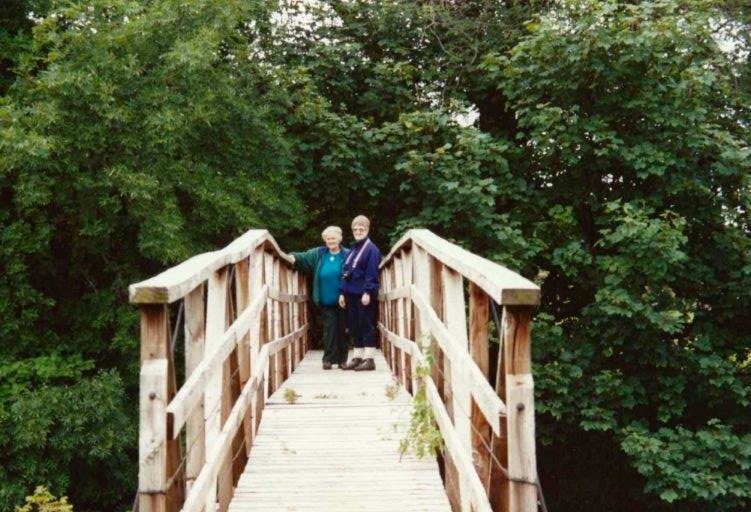 The Footbridge in a Winter setting