While he lived in this parish, he was one of the most regular worshipers in this church – a habit which he continued when he left it –  and from private conversations with him, I know he was a man of deep religious feeling.   Since he went to Auchterless, the hand of affliction has been heavy upon him and his family, and I am afraid the strain of anxiety had been too great for a heart that was never very strong.

Our sympathy goes out today to that stricken home, to his sorrowing widow, herself an invalid; to his daughter and sons and other relatives, and we pray that their hearts may be comforted by the thought of the esteem in which he was held, and by the hope of meeting him again in a better world.

We have received this information from Marion Duff  and with her kind permission we re-produce it here: 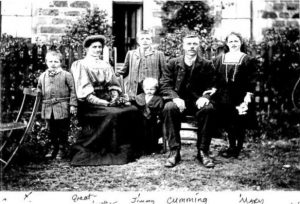 The photo was taken at their home in Glass

Marion asks: Have you any stories or information on either my father Fred Morrison Duff  who  died December 1985 and/or my mother Sheila E.R Whyte?
This has been a missing part of my life due to my mother’s early demise.