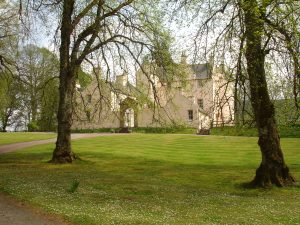 The following information has been very kindly provided by Jolyon Robinson.

Beldorney Castle is one of the oldest surviving examples of Z plan architecture in the North East of Scotland, coming as it does amongst the first three of this type – the other two being Huntly and Terpersie. The castle was built between the years 1550 and 1575 by George Gordon the first of Beldorney. The Gordon family was one of the most powerful families in the north-east at that time and it is more than mere coincidence that both Huntly Castle and Terpersie were also owned by members of the same family.

Amongst persons of note who have lived at Beldorney was one Sileas MacDonell, who was married to Alexander Gordon of Beldorney. She acquired considerable fame as a poet in the Gaelic language and is said to have translated the Psalms and other passages from the Bible into the same tongue.

In plan Beldorney consists of a main block with the principal axis running north-south. At the SE angle is a drum tower whilst attached to the NW angle is a smaller square tower containing the main staircase.

A number of interesting carved sandstone features can be observed around the outside of the building, in particular an ogee-headed panel above the front door, which is thought to be the sacrament house from a Catholic church. During the turbulent period following the defeat of the Highland army at the battle of Culloden in 1745 and the outlawing of the Catholic religion, Beldorney was known as a place where Mass could be heard. Within the castle there are fragmentary remains of the original wall and ceiling paintings, some of which are of a religious nature.

The Victorian additions to the castle were added at the end of the nineteenth century under the direction of the architect Dr Alexander Marshall Mackenzie. A major restoration of the original building was undertaken between 1982 and 1988.

Directly below the castle on the banks of the Deveron is a group of natural stone pools known as St Wallach’s Baths. These pools are named after the eighth century St Wallach, who is believed to have baptised people in the waters beside the river. Healing qualities have been ascribed to the waters in the pools.